Compare and contrast: How Milwaukee mayoral candidates stand — and differ — on issues

Marc Womack April 1, 2022 Milwaukee Comments Off on Compare and contrast: How Milwaukee mayoral candidates stand — and differ — on issues 8 Views

Voters will choose Milwaukee’s next mayor on Tuesday. Here’s where they stand on the questions. (Photo provided by Visit Milwaukee)

The Milwaukee mayoral election is Tuesday. In separate interviews, Milwaukee Neighborhood News Service staff asked the two candidates — interim mayor Cavalier Johnson and former Ald. Bob Donovan – about their plans for the city if elected. The NNS also invited members of the community to submit questions to the candidates.

Donovan focused heavily on crime in the city and said he would create advisory committees to get expert advice on many issues. Johnson discussed jobs and economic development, outlining a vision for the city growing to a population of one million.

While not an exhaustive list, here’s how they differ – and agree – on many of the city’s pressing issues:

Donovan said he supports increasing the number of officers in the Milwaukee Police Department and wants to see more community-focused policing efforts, including beating cops deployed to neighborhoods to renew the community trust.

“There’s no better way to improve police-community relations than this kind of policing,” Donovan said. “The same officer walking through the same neighborhood day after day, people getting to know that officer by first name and vice versa – there is a wealth of goodwill that is developed, not to mention a wealth of information, to Because of that confidence.”

Johnson was also in favor of investing in policing, but also touted his work to get Eight Can’t Wait policies implemented in the police department. The policies aim to reduce the likelihood of a citizen’s death during a confrontation with the police.

The pair worked together to secure a $10 million grant to hire 30 additional police officers in early 2021, according to the Milwaukee Journal Sentinel.

Johnson said he wanted to see increased support for the police department’s traffic safety unit and would support public works developments, such as expanding curbs and concrete-protected bike lanes, to discourage reckless driving,

“When the social norms around driving deteriorate, that’s how you get to the environment we have now in terms of reckless driving,” Johnson said.

Donovan said the reckless driving was nothing new and blamed the recent increase on “an atmosphere of lawlessness that has gripped a significant part of Milwaukee.”

He blamed the lack of consequences for reckless drivers as one of the reasons for the spike in incidents. 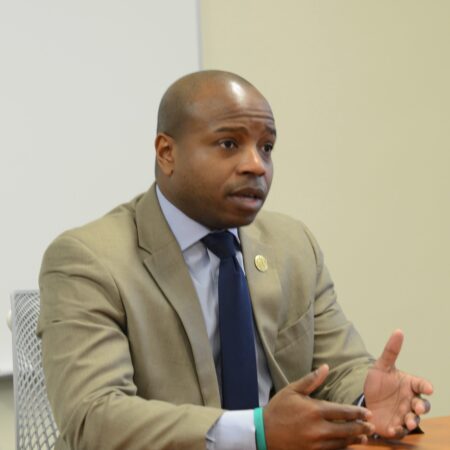 Acting Mayor Cavalier Johnson is focusing on jobs and economic development in his campaign. (Photo by Sue Vliet)

The Milwaukee Health Department Office of Violence Prevention is an agency that works to disrupt violence at the neighborhood level through trusted messengers and community engagement. It was established in 2008 and published Blueprint For Peace, a community program that seeks to address the root causes of violence in Milwaukee.

Donovan said he was concerned about the Office of Violence Prevention.

“I’m not at all convinced that the Office of Violence Prevention…has proven success. It is imperative that any agency we fund can show us as a community what they have achieved. I haven’t seen that information,” he said.

Johnson said he supports the Office of Violence Prevention and has pledged to contribute $5 million to fund it if elected mayor. Violent crime rates were declining before the pandemic, showing evidence of a successful disruption of violence in the department, he said.

Donovan said he wants to create a medical advisory committee to speak with the city about pressing health issues, including mental health and health disparities. He also wants to see a more active initiative of public health nurses and mobile clinics to focus on underserved areas of the city.

“I would certainly support the health department stepping outside the walls of its downtown offices or its neighborhood clinics and actually engaging people where they are in the places where they live so that they know they have access to it,” Johnson said. .

Donovan said he would raise funds from a number of funding sources to remove lead diversions or lead-containing water pipes. He said he hopes to reduce the city’s lead phase-out schedule, aiming to replace Milwaukee’s 70,000 lead diversions in 10 years.

The project is expected to last around 70 years at its current rate, with around 1,000 moves per year.

Johnson said he felt the lead was a huge problem and hoped to continue working with federal partners. He said the city is unlikely to be able to invest as much as it wants in the coming years due to the upcoming pension crisis.

Johnson also noted the importance of mitigating exposure to lead in paint and soil around households. 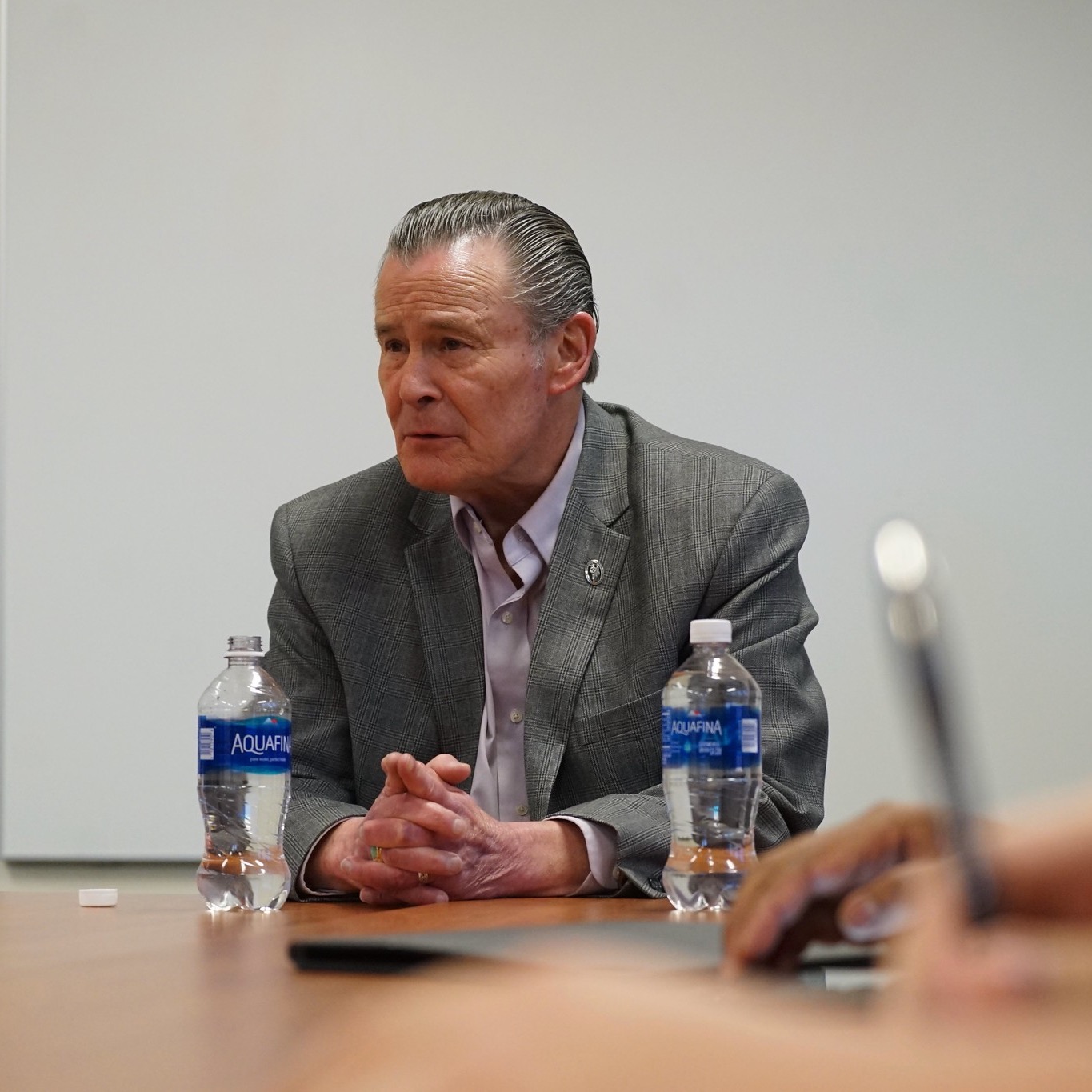 Former Ald. Bob Donovan has centered his campaign on reducing crime in the city and supporting the Milwaukee Police Department. (Photo by Adam Carr)

Donovan said he would appoint a housing czar to oversee the city’s efforts to help residents.

“There are north of 20 agencies working on housing…but they don’t necessarily work together,” Donovan said. “The role of this director of housing would be to bring them together and coordinate a plan and strategy to address this.”

Johnson said he supports the continued development of interagency housing policies to better align the efforts of separate city agencies. He also pointed to the American Rescue Plan Act’s $43 million investment in housing programs and felt the city invested the money wisely.

Johnson said he wants to see growth in “family support jobs” for city residents. He called for Milwaukee’s greater involvement in the tech industry and said he would try to connect the city to the green power generation championed by the Biden administration.

“When the President of the United States talks about building back better and transitioning our economy to a greener economy, I can’t think of a better place than Milwaukee to be a showpiece for that,” Johnson said.

Johnson also said transportation is a major barrier to employment. He said he would work to establish a regional transportation system if elected to help city residents get to jobs in the suburbs.

Donovan said one of the biggest contributors to the lack of jobs is crime. He stressed the need to reduce crime rates before potential employers take notice. He also said bureaucracy in city government had hampered businesses in the past and he would aim to remove it if elected.

“When you look at a business that (plans) to move into a community, the first thing they look at is crime,” he said.

Johnson also said he sees the role of mayor as an opportunity to address fundamental factors that can affect schooling, including food insecurity, economic insecurity, violence and trauma.

Donovan said he would create an education advisory committee to address issues in schools and supported improving access to charter and private schools in the city.

Both Donovan and Johnson oppose the recent proposal to dismantle Milwaukee Public Schools, a plan that would divide the current system into four to eight smaller districts starting in 2024.

One of the issues looming for the city is soaring pension payments. The city’s pension contribution is expected to nearly double next year, from $71 million to about $130 million with a sustained increase in subsequent years. The financial constraint could force the city to lose nearly a quarter of its workforce by 2025, according to the Milwaukee Journal Sentinel.

During a town hall debate, Johnson said he would be willing to work with the state to transfer some city employees to their retirement system to ease the tax burden. He also hoped to explore other options for raising state revenue, according to the Milwaukee Journal Sentinel.

Johnson said he does not want to cut substantial funding to city services, including the police department.

Donovan said he would seek a partnership with the state to address the issue and audit city government to determine how effectively city dollars are being spent.

A plan that sets them apart from their opponent

In their respective interviews, Johnson and Donovan were asked about a revolutionary plan that sets them apart from their adversary.

Donovan said his plan is a city scholarship program that would allow income-disadvantaged children with certain grades to access secondary education and trade schools.

“I think that would be a wonderful thing for Milwaukee,” said Donovan, who pointed to the benefits of a well-trained workforce.

Johnson highlighted his plan for economic development in the city, which he says will work to create a safer and more prosperous community within the city.

“I want to grow the city. … I don’t think we should be nibbling around the edges trying to reach 600,000 people again,” he said. “We should try to reach a million people or more. But the only way to do that is to make sure we have a stronger city, a safer city, and a city that provides economic prosperity for everyone who lives here.

The mayoral election is Tuesday. Here’s everything you need to know to vote, via our previous NNS reports.

Return to Celtics basketball: 10 takeaways from the Boston Celtics-Milwaukee Bucks

1. “That was Celtics basketball” This quote came from Jaylen Brown after the game after …